An intimate, evidence-based conversation was held on the seacoast in Maine with a small number of exceptional colleagues to both reflect on the past 25 years of coaching and forecast the next 25 years of the industry. Preceded by a series of surveys regarding executive coaching and to be followed by multiple publications regarding insights generated at NECS, this was a highly productive and consequential forum for the stewardship of our field. 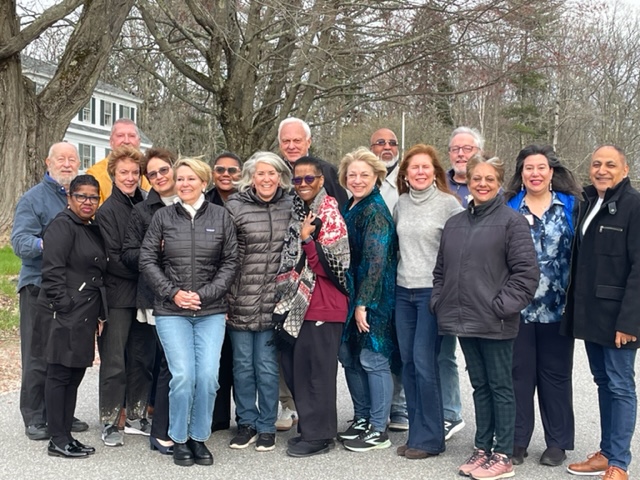 Held on Tuesday evening through Friday morning, April 26-29, 2022. NECS took place at the Harpswell Inn Bed & Breakfast on Lookout Point in Harpswell, Maine—a scenic and historic inn located on the edge of the Atlantic Ocean in the heart of lobster country. This event was designed to connect in person with a diverse group of brilliant professionals for extended, generative, evidence-based dialogue to create tangible, if not transformational outcomes and future actions to lead the next 25 years of Executive Coaching. It was also designed to enable other participants to meet virtually with the in-person participants during a final wrap-up conversation on Friday morning.

The following “open space” norms were established to provide guidance for the conversations that took place at NECS:* Whoever comes to the summit is the right person (an appreciative perspective)
* The topics being addressed are those that are most important, and those about which participants have a passion
* Whenever a particular topic emerges, it is the right time
* Whatever happens is the only thing that could have happened
* There is one Law…”Law of Two Feet: Shoes are made for walking” (participants should feel free to move to another group and another topic.”

Themes that emerged at the NECS

Themes that received the most attention at the NECS

The NECS was not just a reunion and renewal of old acquaintances. It had a much more important purpose related to stewardship of the field of professional coaching (and specifically the coaching of executives in organizational settings). Unlike when the original Executive Coaching Summits (ECSs) were held, we now have venues for the distribution of important documents regarding the status and future of the field that are generated in conjunction with NECS.

Originating from the original ECSs, the Library of Professional Coaching (LPC) will publish proceedings from NECS and results from Survey Monkeys–as well as video recordings taken during the sessions and, in particular, the Zoom broadcast that will conclude the summit on Friday (April 29). LPC has already published the products of other summits and symposia – such as the article produced by participants in a symposium held in Istanbul, Turkey. This highly productive symposium was convened by the International Consortium for Coaching in Organizations (ICCO) (that originated like LPC from an early ECS). Here is a link to this often-accessed LPC document: https://libraryofprofessionalcoaching.com/applicationsuses/executive-coaching/coaching-high-potential-and-high-performance-clients/

LPC will not only publish individual articles but also produce compilations of documents—such as that found in The Future of Coaching. Topics such as coaching to the greater good, leadership development and coaching, coaching and certification, the history of coaching and the ethics of coaching have been or soon will be addressed in issues of The Future of Coaching.  LPC also produces a yearly document, called Curated, that provides even more expansive compilation of essays and video recordings related to a specific professional coaching topic.

We anticipate that one of our future issues of The Future of Coaching and/or one of our annual Curated compilations to be published in LPC will be devoted to the outcomes of the NECS. Given that LPC has for many years been identified as one of the most important sources of information about professional coaching throughout the world, we can be assured that publications emanating from the NECS will receive attention and will potentially influence the future direction of our field.

More immediately, those attending the NECS influenced one another and will bring their own new ideas and perspectives to the clients they serve as well as the other professional coaches with whom they interact (and whom they often mentor as senior practitioners in the field). Furthermore, those participating in the Friday Zoom call were beneficiaries of the ideas generated and perspective shared at the NECS.